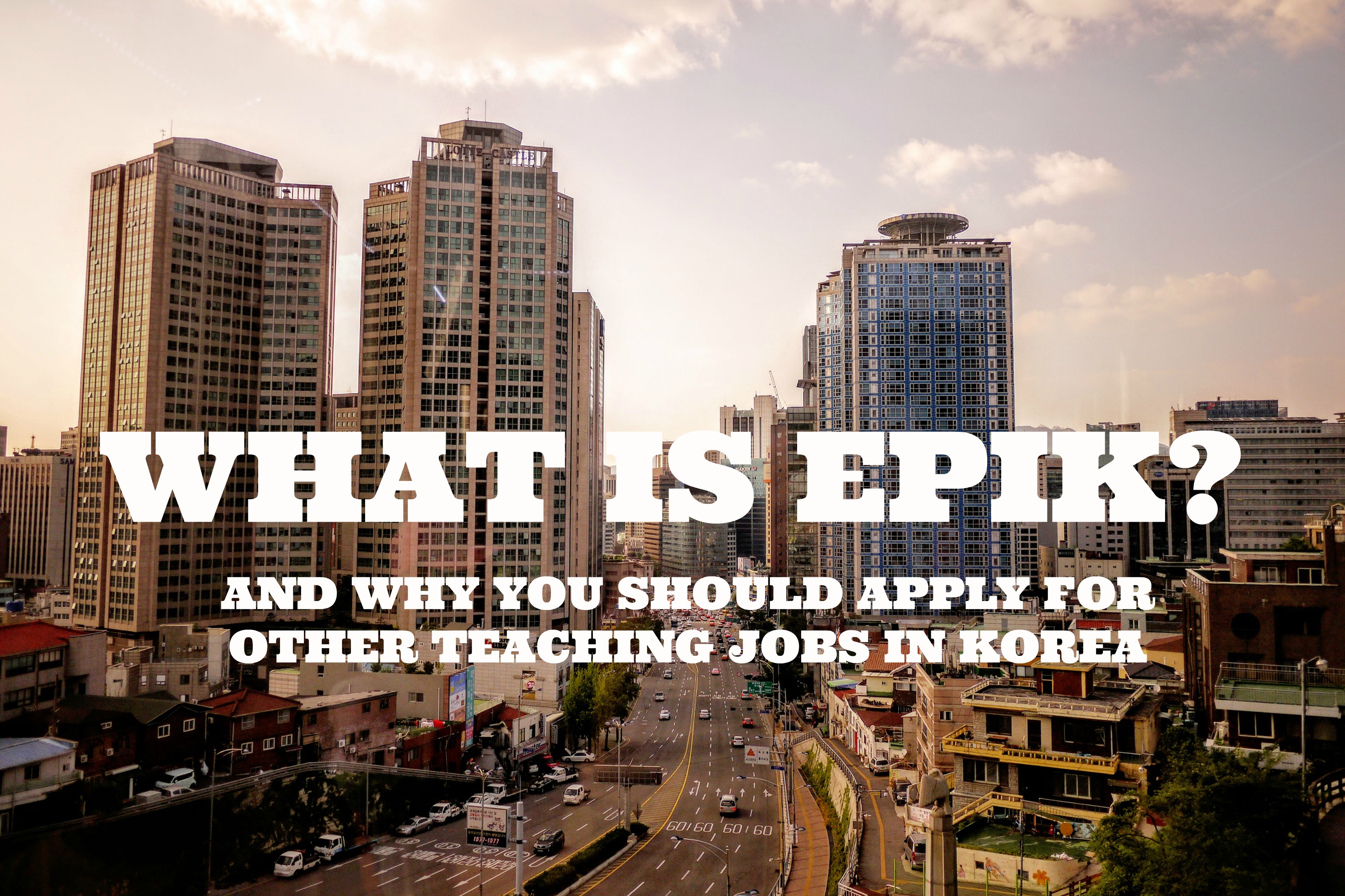 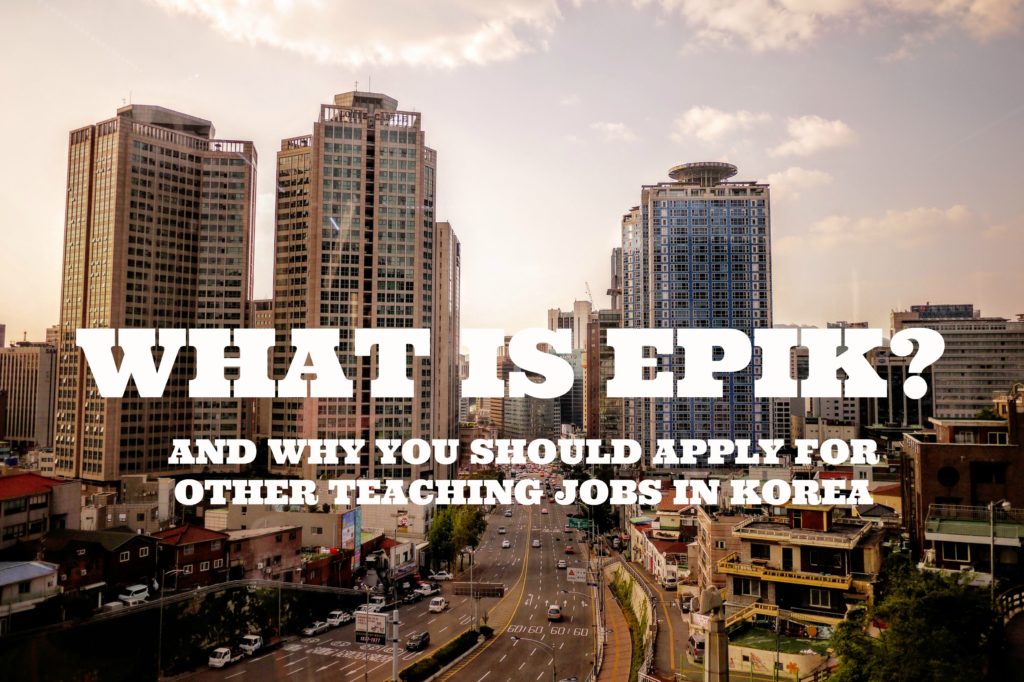 I like to think that when it comes to all issues related to teaching in Korea, I’m on the ball.

That said, after a job interview I did for the EPIK Program, I must say that, even after the interview was over, I still didn’t completely understand a.) what EPIK is, and b.) what it does.

And if I’m struggling to comprehend this, I can’t imagine how confused potential first-time teachers must be. There’s nothing more frustrating then when you’re frantically googling and trying to get a straight answer…only to leave more confused than when you started.

It’s especially frustrating given the sheer amount of interest in the program. More times than not, it’s usually the first thing new teachers who are interested in Korea apply for. I’ve literally seen hundreds (if not thousands) of posts from potential newcomers about EPIK, and how they can maximize their chances of actually getting in.

It’s gotten to the point where people become absolutely obsessed with it, and won’t even CONSIDER the possibility of coming to Korea to teach under any different circumstances

So that said, let’s clear all this up.

Before we dive right into it, a little background is needed.

EPIK is, essentially, a division of the Korean Ministry of Education. More specifically, they fall under the “National Institute for International Education” (NIIE).

EPIK’s official role is: “Advertising/Promoting”, “Screening/Selecting” and “Placing/Training”. All of these activities are done with the goal of placing native English speakers (you) in public schools as teachers. EPIK’s role is to connect you with a particular board of education in Korea

If that sounds suspiciously like what a recruiter does, you’re on the right track.

So, does that mean that, as an English teacher with EPIK, you technically work NEEI?

Here’s where it gets complicated.

Probably the best way to get to the bottom of what EPIK actually is to describe what EPIK is NOT. And in order to do that, we need to address the biggest misconception of all:

The only people who DO work for and get paid by EPIK…are people who actually work for EPIK (government officials, program coordinators, etc.)

But…you are being “hired” by EPIK.

Confused? You should be.

Here’s the deal. The easiest way to conceptualize this is to imagine EPIK as one big glorified recruiter. Except, instead of it being a private company that profits off of setting teachers up with schools, it’s a government operated, nonprofit entity.

Just like a recruiter works with hogwans, EPIK works with Korea’s provincial and municipal boards of education. Every year, each of these BOEs set aside a certain number of positions for native English teachers that they’ve determined will be filled by EPIK.

You apply for a public school job through EPIK just like you’d apply for a hogwan through a recruiter. They then take your application and, based on your strengths, weaknesses and preferences, pair you up with a particular board of education in Korea. That BOE (if they like your application) then officially hires you. Your employment contract is with them.

In theory private recruiters are supposed to do that too…but in practice a lot of them are just interviewing you to make sure you’re not a complete mess.

Step 1: Apply. Go to the website, fill out the long, arduous application, get the letters of recommendation they require, etc. (it’s a tremendous pain in the ass and will probably take a couple weeks).

You’ll have a spot on your application where you can indicate which board/office of education (which part of Korea) you’d like to be recommended to. You’ll also have a spot where you can indicate that, in the event that they can’t recommend you to that particular BOE, you’d like to withdraw your application or remain flexible in working for a different one (if you REALLY want to get in, I’d recommend being flexible).

Send off the application and then….wait. You’ll get an automated reply letting you know that they’ve received your application, and that you should hang tight until they contact you.

Step 2: You’ll get another email a few weeks (or even longer) later letting you know that:

a.) you’ve been rejected outright, or

b.) you’ve passed this stage of the process and you’ve been invited for a Skype interview.

If you get an invitation email, you’ll be provided with a time and day for the interview based on your availability in your application (usually within a week or so). Send them a reply email confirming that you’re available.

Step 3: Interview on Skype. At some point I’ll write a detailed post on interviewing for ESL jobs (including EPIK), but just expect that the interview will take anywhere from 20 to 30 minutes.

Once it’s over, you’ll be told to wait, again, for two to three days (although from my experience it can be up to a week later).

Step 4: You’ll get an email from your program coordinator letting you know if you passed this stage of the selection process or not. If you did pass, then you’ll send in the hard copies of all your documents (recommendation letters, criminal background check, degree, etc.). Get those in ASAP, because from what I’ve heard, they won’t start pairing you up with the BOE’s until they have them.

Step 5: You’ll get a final email letting you know that you’ve past the “final stage” of the process, and that you’ve been matched up and offered employment with a particular BOE.

At that point, you’re all set and you can apply for your visa.

WHAT DOES EPIK ACTUALLY DO FOR YOU?

I told you that I generally see EPIK as a glorified government recruiter, and I stand by it. Here’s why:

Once you get to Korea, you’ll have a big, week long orientation sponsored by them.

After that, you’re on your own. You’re in the hands of your BOE.

You work for the BOE.

You report to the BOE.

You’ll have a supervisor to deal with…who works for the BOE.

The fact that you came over with EPIK really only effects you for the first week you’re in Korea. Those other 358 days…that’s between you and your school.

Now, to be fair, EPIK does have some control over certain things. Their coordinators will help you out and advise you with issues like documentation. They set and maintain the scale at which you’ll be paid (including the 1,300,000 KRW flight allowance and 300,000 KRW settlement allowance).

They can (maybe) help mediate between you and your BOE in the event of a dispute.

But at the end of the day, you don’t work for EPIK. You work for “such-and-such-BOE” of “such-and-such-province-or-metropolitan-area”. They employ you, they dictate your work life, and they’re the one’s who ultimately pay you.

I know it sounds like I’m repeating myself, but I feel like I need to. I’ve talked to SO MANY people who are under the illusion that they’ll be working FOR EPIK.

No. You’ll be working FOR a Board of Education THROUGH EPIK.

You’re not their employee. They’re just the ones who bring you to Korea and set some of the guidelines for your employer.

Compared to what? Is it more secure than a hogwan? Well, yes. If you’re employed by a hogwan and they want to let you go, they only have to make sure they comply with Korean labour laws. If your Board of Education wants to let you go, they have to jump through more hoops and go through the EPIK office to do it.

That said, don’t think that just because you’re working for (sorry, THROUGH) EPIK that you’re totally secure.

The reality is this; a lot of BOE’s in Korea are flat broke right now. Most of them have had their budgets slashed dramatically. That means that not only will fewer and fewer teaching positions be set aside every year, but it also means the potential for having your job cut increases as well.

Want an example of this? In 2014, the Incheon Metropolitan Office of Education had a “budget crisis” and cancelled all new teaching contracts AFTER EPIK had done all their hiring.

Apparently some of the new teachers were “asked to resign their position” only a few months into their contracts as well.

Want another example? In 2009, SMOE (the Seoul Metropolitan Office of Education) hired too many teachers and cancelled their contracts at the last minute. Literally, after teachers had received their visa’s and booked their plane tickets.

These cases are the minority, but still, it’s important to remember that nothing’s 100 percent guaranteed.

WHAT ARE SOME ALTERNATIVES TO EPIK?

It’s no secret that the number of EPIK teachers has been dramatically shrinking in recent years. If you believe everything you read on Dave’s ESL Cafe, they’d have you believe that the sky was falling and that all English teachers in Korea should just pack up their bags and leave the peninsula on mass.

No. Just. No. I’ve been hearing that since 2011, and honestly, at this point it’s in one ear and out the other.

An example of this is GEPIK (Gyeonggi-do English Program in Korea). Gyeonggi Province is the huge area that surrounds Seoul and is connected to it on the subway line, and their BOE hires teachers through private recruiters.

Most of the other BOE’s in the country have similar programs. They work with private recruiters throughout the year to bring new English teachers in. And despite all of EPIK’s rhetoric about how “prestigious” their positions are…it’s basically the exact same job.

EPIK’s a middle man. You’re just cutting them out.

There’s also an abundance of hogwans. Everyone talks about how awful hogwans are, but honestly they can be a great option if you do your homework.

At the end of the day, the reality is this; Korea has one of the most developed ESL industries in the world. Learning English is still a high priority for a lot of Korean’s, and they’re still going to great lengths to master it.

English in Korea isn’t going anywhere. At least not any time soon.

And EPIK is NOT the be-all and end-all for teaching jobs. By all means, apply for the program. But if you get rejected, keep your options open and try to find other things.