How To Pack For A Year In Korea 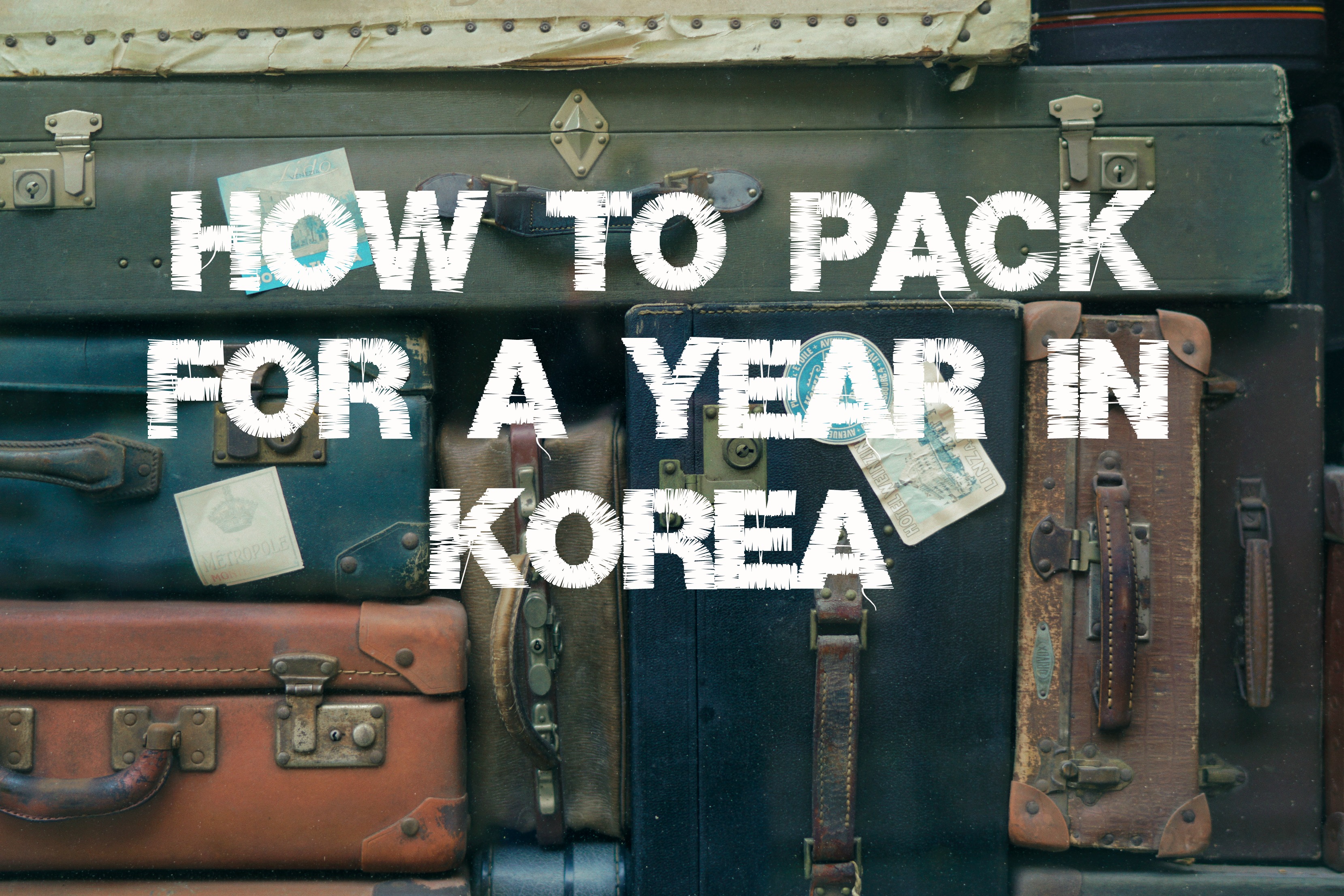 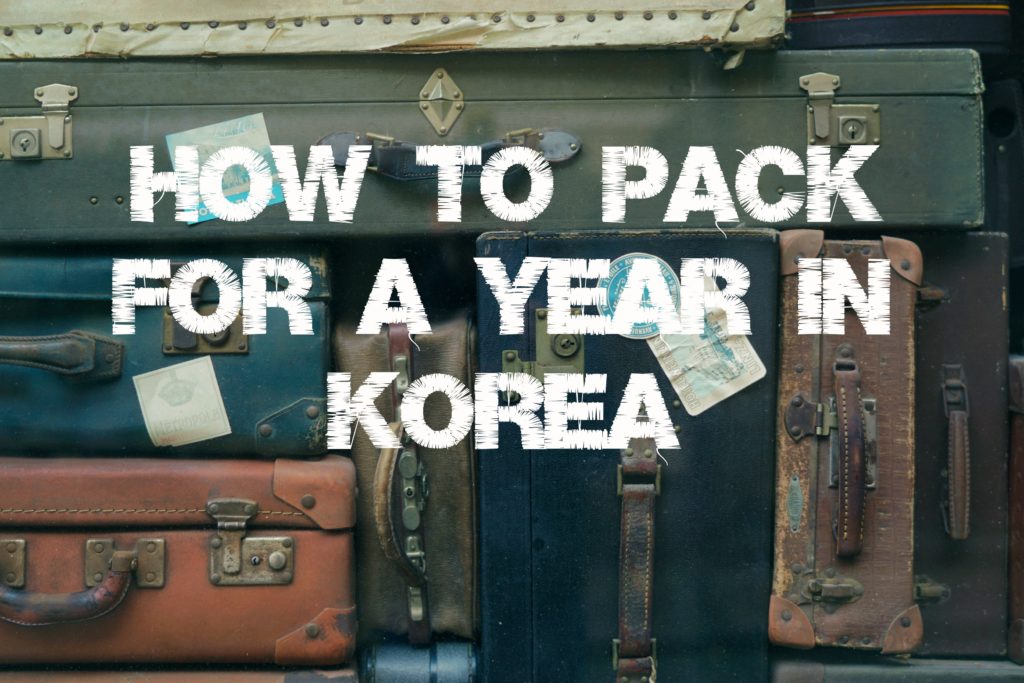 For a lot of people, going to Korea to teach English is their first experience living in a foreign country.  For some, it may even be the first time they’ve lived on their own.

Even if you’re an experienced traveller, the prospect of actually moving to a foreign country for an entire year can be a little daunting.  There’s a lot that needs to be done before your departure- paperwork, visas, saying your goodbyes…and packing.

And I remember packing. I remember sitting on my bed, looking at two empty suitcases, and thinking…

I wish I could say I packed light and economical, but the reality is this- for my first year in Korea, I packed too much. WAY too much. Seriously. Those two suitcases were STUFFED. I had a minor freakout at the airport because I was over the limit and had to ditch about 10 pounds worth of stuff.

After all, how could I possibly live in Korea for a year without a basketball? Or three pounds of dried chilli powder?

WHY YOU DON’T NEED AS MUCH AS YOU THINK

It didn’t take long before I realized that I only really needed about half of what I’d packed. A lot of the stuff I brought with me that I was convinced I just had to have, I ended up leaving behind in my first apartment.

Nowadays when I pack, I pack light. I still use two suitcases, but they’re not nearly filled to the brim. And they contain things that I actually need.

Some people who are new to living abroad seem to think that any foreign country will automatically be a backwater without all the comforts of home. I’ll admit that I was guilty of this kind of thinking as well.

Here’s the reality- you’re moving to a modern, comfortable first-world country. A lot of the things you love from back home, you can find in Korea. 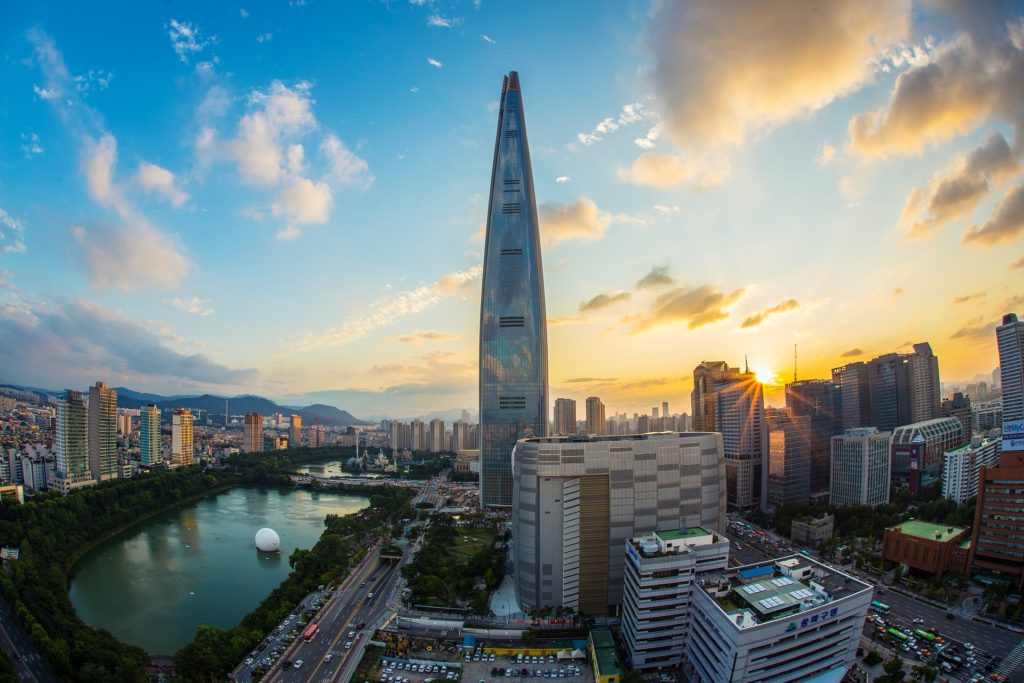 I love cheese. Guess what? There’s cheese in Korea.

There are tons of Western clothing stores.

There’s an abundance of household items sold at every department store, just like back home.

If you’re coming as an English teacher, you’ll also be moving into a furnished apartment. So don’t be packing lamps and pillows, because all your essentials will be there. 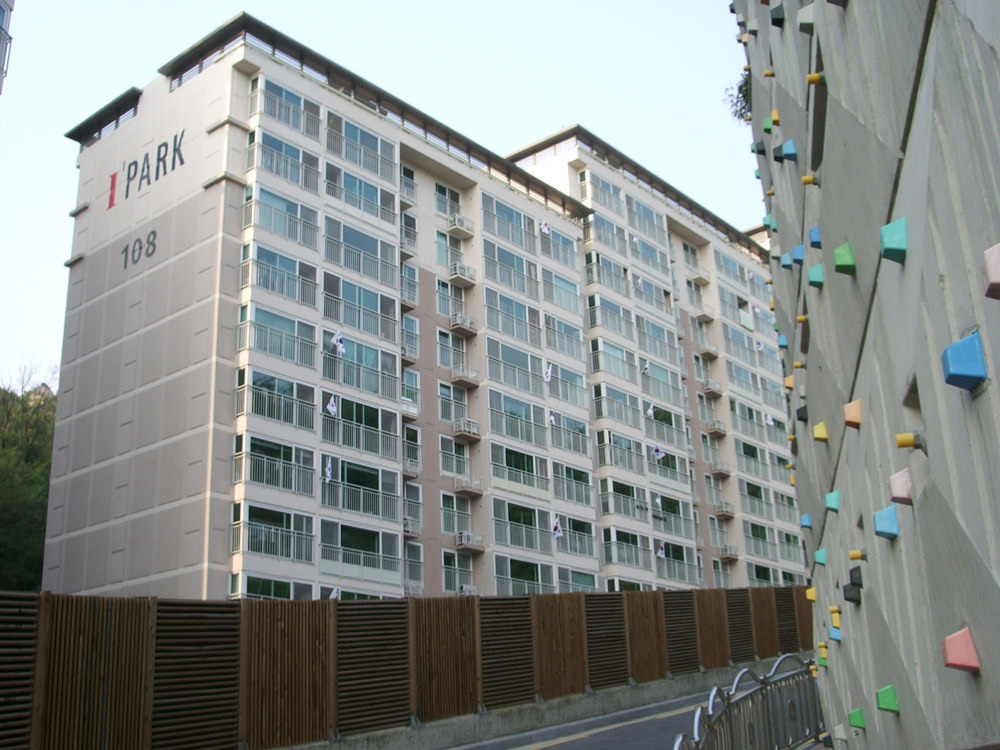 One of the perks of teaching English in Korea is that you’ll move into a free furnished apartment right away (photo credit).

As for extra stuff, you really don’t need to worry about it. A lot of times you’ll be moving into an apartment that’s had teachers live their before, and leave stuff behind.

You’ll also soon discover that as other teachers leave Korea and go back home, they usually take all the extra stuff they bought and sell it on the cheap.

WHAT YOU DON’T NEED

Food: I get it. You’ve been looking around online, and you’ve been frantically googling whether or not you can get (insert your favourite food) in Korea.

You can.  Seoul is the second largest city in the world. I have, thus far, had Turkish, Italian, Greek, Spanish, Mexican, Japanese, Brazilian, and, probably, far more than I can actually remember, in Seoul.

Not that you would ever stick a fully cooked burrito in your suitcase. More than likely, you’ve been searching around to see if you can find specific ingredients to cook your favourite foods with.

Clothes: Obviously you’ll need to bring clothes with you. But what you won’t need is a years worth of clothes. Westerners tends to get worried about this and assume that the clothes they make for Asian markets fit differently (small).

And they’re right. I’m an extra small in American sizes…in some clothing stores tailored for Korean guys, I’d be lucky to fit in a medium.

But there’s a ton of international clothing retailers that carry larger sizes. H&M, Zara, Gap, Uniqlo- you’ll find these stores all over Korea, so you should be fine.

Bottom line- don’t be stuffing 50 pounds of clothes in your suitcase in fear that you’ll have nothing to wear for the next 12 months.

Books: I screwed up and packed 1/3 of my suitcase with hardcover books when I first came to Korea. Take my advice-get a Kindle. Or at least download a Kindle on your computer.

And if you’re wondering where exactly in Korea you can go to buy English books you for some reason can’t get on kindle, here’s your best bet.

If you’re built in such a way that you have a lot of trouble finding clothes in your own country, you may want to plan ahead and allocate some space in your suitcase. Over 6’2 or under 5’1? Might want to plan ahead. Built like Brock Lesner? Definitely plan ahead.

Shoes: This is one issue that people tend to have in Korea, because shoe sizes here tend to run quite small. I’m a size 10 (North American) mens, which in my experience is as high as it usually goes in most stores. Something to take into consideration.

Medicinal/Personal Use: If you’re on any medications, make sure you pack enough of it. Obviously if it’s prescription medication, you’re going to want to have enough of it (check and see if you’ll have any issues bringing it past customs).

But this also extends beyond medications. I buy my contact lenses in bulk because they don’t sell the kind I wear in Korea. Do your research, and if you can’t get it in Korea, pack a lot of it.

Sentimental Items: I get emotional sometimes too, and even after almost 5 years I still get homesick from time to time. It’s nice to have a few physical, tangible reminders of home.

This can be anything from a childhood teddy bear, or a favourite blanket, or pictures of friends and family to put on your wall. Just don’t get crazy and pack every little trinket you own.

International Drivers Permit: In the vast majority of cases, you’ll have absolutely no reason to buy a car. That said, having an international drivers permit (IDP) is a good idea.

The Korean countryside, is stunningly beautiful. There are tons of hidden gems scattered throughout the country. Just knowing that you can rent a car and go on a road trip opens a lot of doors. 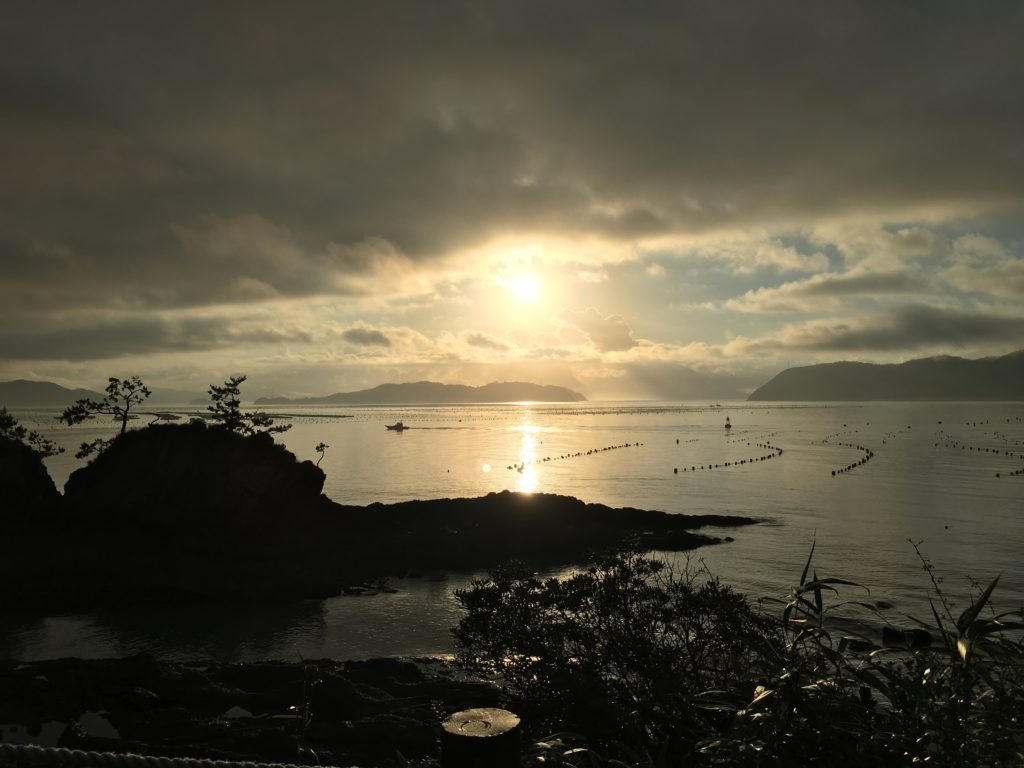 The southern coast of Korea

Deodorant: Unless you’re really picky about what you use, you can find most of your basic toiletries (shampoo, toothpaste, soap, etc.) in Korea, so don’t be that guy that brings a years worth of soap.

That said, the one thing I actually do advocate bringing a years worth of deodorant. I have no idea why, but the deodorant in Korea is absolute crap. And the few stores that sell Western deodorant brands sell them at EXORBITANT prices. Just trust me on this one- you’ll thank me for it in August.

Candy/Stickers From Your Home Country: No, not for your own consumptions, but for teaching. These make amazing prizes when you do games in your class. The best part is they don’t even have to be expensive. Just get a few bags at the dollar store. It’s not so much the actual candy or sticker, it’s the fact that it’s from an “exotic” foreign country.

WHAT YOU WILL NEED

Power Converter: The voltage in Korea is 220. That means if you’re from North America, you need something that will convert 220 volts to 120 volts.

If you’re from a country with the same voltage, check and see if the types of plugs are the same. If not, you’ll need an adapter.

This is for any electronics you’re bringing from home.

Work Clothes: Find out what your school’s dress code is before you leave.

A lot of them opt for business casual. Some will let you wear jeans (especially if you’re working with little kids). I’ve worked at a hogwan that required male teachers to don a tie everyday.

Make sure you know what’s expected at work and pack appropriately, because you’ll often have to hit the ground running when you get here.

Passport (And Extra Documents): You’ll need your passport to get on the plane (duh). Make sure you’ve already got your visa stamped in it before you depart (again, duh). 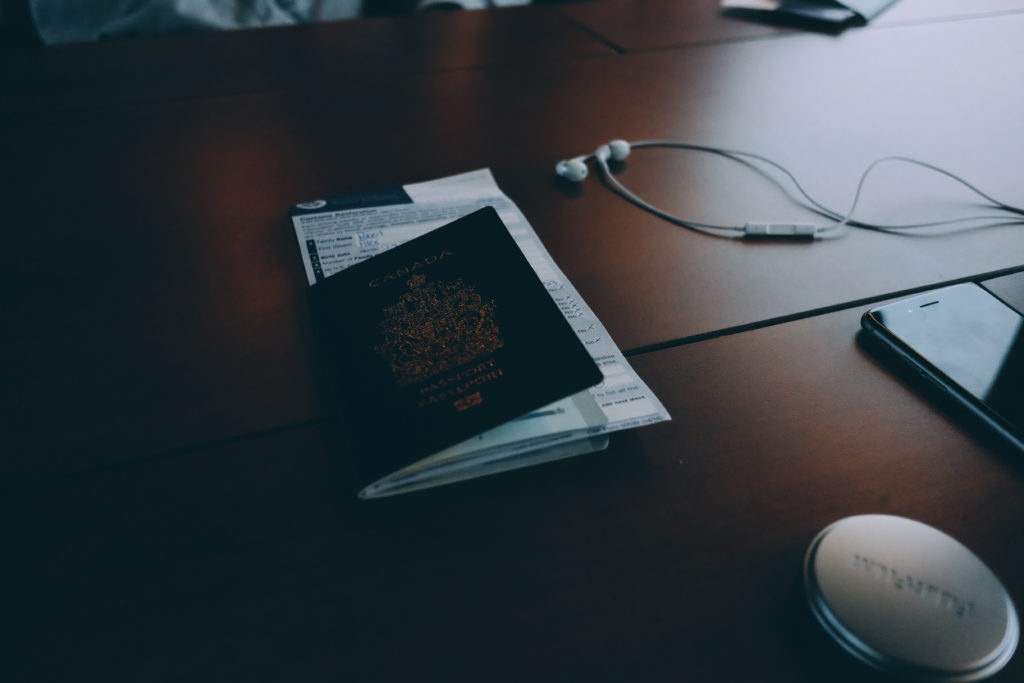 Also, make sure you bring backups and copies of all the documents that you submitted to immigration. You should also bring your original degree with you. Korean Immigration’s rules on paperwork change constantly, so it’s a really good idea to have these things handy.

Korean Won: In case this is your first time travelling, you should know that exchanging your currency at the airport means getting hit with a lot of fees and a bad exchange rate. Get your money converted to Korean won at your bank before you leave.

And while we’re on the topic of money, a lot of people ask how much they should bring with them. My answer to that is this; figure out when your first paycheque will be. Then work backwards and bring (at minimum) enough to eat, get around and pay for random things.

For example, you’ll have to pay for your mandatory medical check at a Korean hospital, which is about $100.

From there, add on any spending money if you want to do some fun stuff before that first paycheque. For me personally…I’d bring anywhere from $600-$800 (about 600, 000-800,000 KRW) to get me through the first month, although you could probably get by with less.

I’m also an advocate of having an emergency stash of money in savings, just in case.

You should also call your bank/credit card company and let them know you’ll be in Korea. Nothing worse than having your credit card frozen.

Contact Information: Make sure you have the email and phone numbers of important people, including those of your employer and any recruiters you went through. The last thing you want if there’s some kind of miscommunication regarding your arrival is to be standing around the airport with all your worldly possessions wondering if someone’s going to come pick you up.

A lot of airlines let you bring two 50 pound suitcases. That is more than enough.

Remember, you’re coming for an experience, not to recreate home. The less time you spend in your well-decorated apartment, the more time you’ll be out enjoying Korea.

Leave the espresso machine behind.