Why I Hate “Cool Biz” 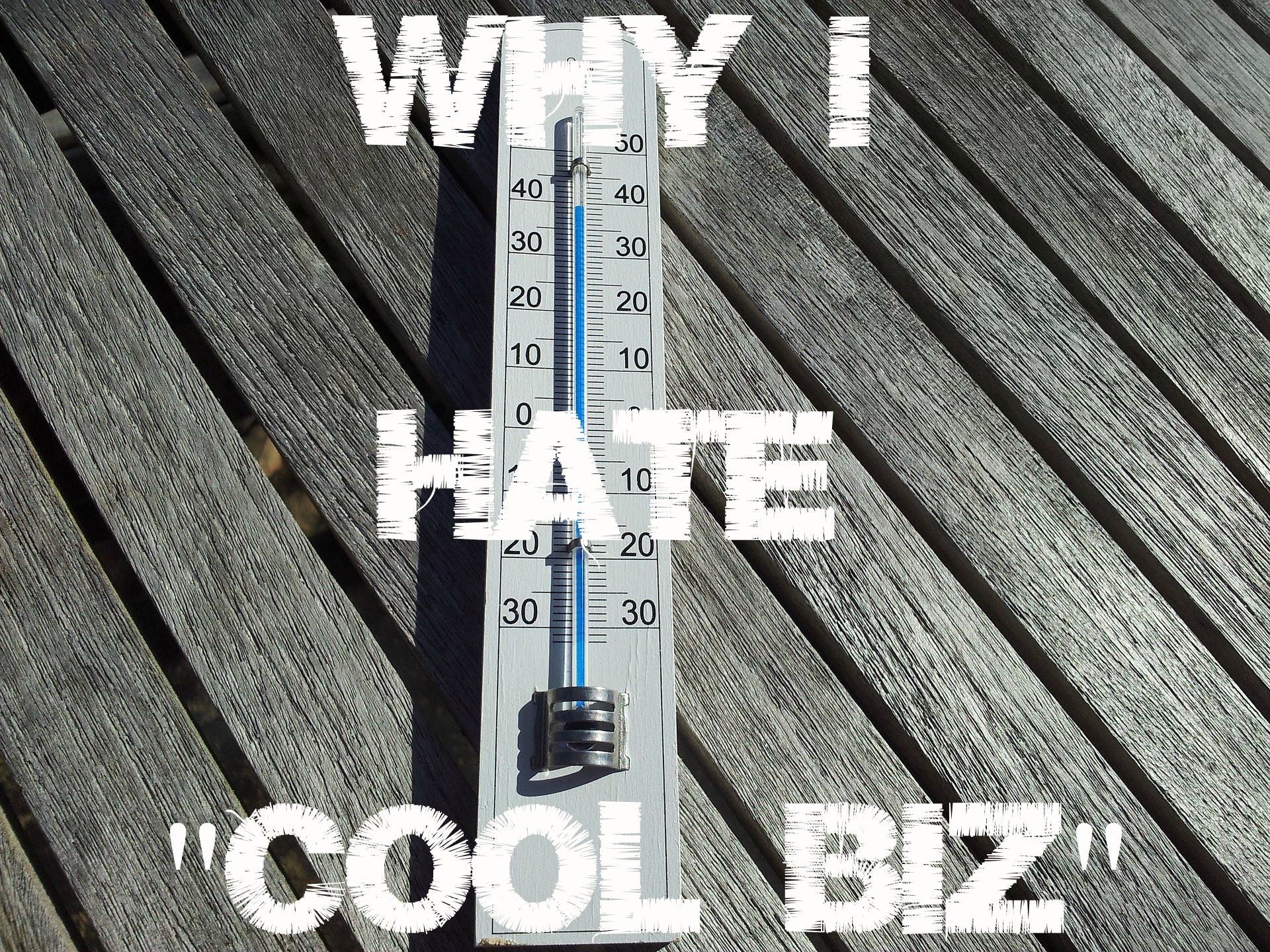 12:30pm. Tuesday. June 2016. I’m sitting at my desk in the teachers room, eating my lunch and pretending not to notice the perpetual sheen of sweat stuck to my forehead.

Or the fact that my shirt is stuck to my back because I worked up a sweat trudging up the hill on my way to the office, and now I’m screwed for the rest of the day.

Or the fact that it’s actually cooler outside than it is inside the office.

I have a lot of favourite days in Japan. The first day of spring.  All the days of golden week.  New years day.

This particular day, however, was the start of my least favourite time of year:

Every year in June, Japan goes from being absolutely beautiful to a hot, sticky mess. It’s also the time of year that despite being a hot, wet, sticky mess and a first world country, offices and buildings across the country will either barely turn the air conditioning on, or just leave it off all together.

This, ladies and gentlemen, is Cool Biz.

If you’ve ever spent the summer working in Japan, unless your job was as a life guard, you probably know exactly what this whole cool biz deal is, but for those who have yet to experience it, let me explain it to you.

Cool Biz is the brainchild campaign of the Japanese Environment Ministry. The premise behind it is to cut electricity consumption by having Japanese businesses and government offices set the air conditioner to a steamy 28 degrees.

In exchange for their suffering, employees are encouraged to ditch their jackets and ties, and don short sleeves.

Miraculously, this whole concept has taken off. Everywhere you look in July, you’ll see salarymen walking around without the perfunctory business suit on. 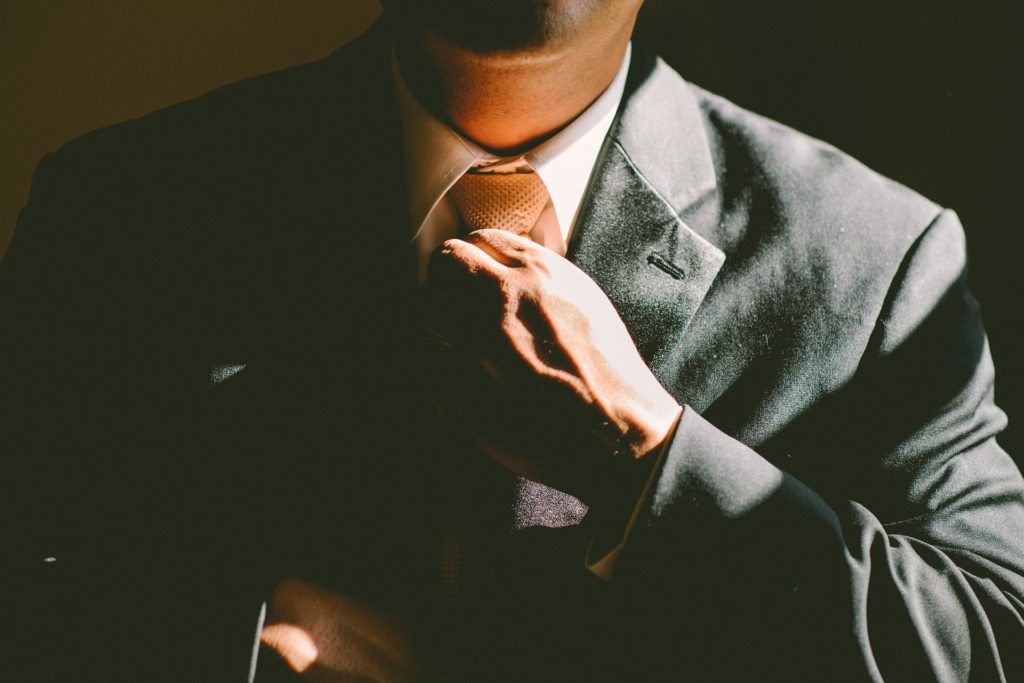 This is NOT what you want to be wearing in August in Japan.

WHAT COOL BIZ GETS RIGHT

Maybe I should start with what’s good about Cool Biz. The good news it’s an excuse for people to not wear a suit in 37 degree humidity, and get acquainted with the wonders of business casual.

Which is awesome, because of all the things you don’t want to wearing in August in Japan, it’s WOOL (give me yukata and I’ll gladly rock it at work).

Because of this relaxed dress code, a nation that reaches tropical levels of heat and humidity 4 months of the year can get some relief.  So that’s good.

WHY I HATE COOL BIZ ANYWAY

I can understand that in order to be a good, global citizen who cares about the future of the planet, you should be willing to cut your consumption and endure some discomfort.

I love my air conditioner, and I would seriously rather give up my bed and sleep on the floor for the rest of my life than endure summer in Japan without it. But even I’m willing to concede that, on a Sunday afternoon when I’m lounging around the apartment, I could make do without it.

It’s a much different story at 2:00pm when I’m in my office trying to get work done. It’s no real secret that temperature effects productivity. Although numerous studies have shown people are more productive at cooler temperatures, it’s just common sense. Ergo, if you take the air conditioning out of the office, less gets done, and productivity suffers.

Or as John R.S. Kirkham, an Australian who lived in Singapore before the advent of air conditioning, described the work culture:

This would be a problem anywhere, but it’s especially a problem in Japan. Japanese businesses get a lot of things right, but one of the places that they’re lagging behind in is productivity.

Right now, the thing Japanese companies and organizations need is to find ways to increase it’s productivity, not slow things down by forcing their employees to work in a sweat lodge. And that’s not just my hunch; one economist estimates that all told, Cool Biz cost the Japanese economy 653 billion yen in 2008 alone.

I’m sure that FAR outstrips any money these companies save by being stingy with their AC.

WHAT ARE SOME BETTER IDEAS?

I think what drives me the most insane about cool biz is the double standard. Let me get this straight, you don’t want to spend the money keeping the office at a reasonable temperature during the day, but you’re willing to keep the singing toilets plugged in?

Then there’s the issue of the heating in the winter. All the talk about being eco-friendly seems to go out the window as soon as it gets even a little chilly. I know I’m from the frozen Canadian tundra, and my tolerance to cold is pretty hardcore, but holy shit does the heat ever get jacked up high in the office.

To me, the best solution to tackle this problem would be to kill two birds with one stone so to speak. Ever notice how all the office lights in Japan are still on at 10:00pm? I sure have.

One of the reasons electricity costs are so high for companies is because their employees are putting in such crazy long hours. It’s a paradox for Japan- they work some of the longest hours, yet have some of the worst productivity.

So, how about starting a campaign to get Japanese office workers to go home on time? Even if you do think you’re doing some good by having the AC running at 28 degrees, it defeats the purpose when you run it 14 hours a day.

This isn’t even a new idea, it’s something that’s been talked about at length before by the government for years now. It’s no secret the long overtime hours salarymen put in aren’t doing them any favours.

By actually implementing a campaign to turn the power off at 5:00pm and send everyone home, not only do you free up employees and ensure that they’re well-rested for the next days work, you save an incredible an incredible amount of power in the evening by turning EVERYTHING to zero- air conditioning, lights, computers.

I could definitely get behind that.